So, I went back up to the mountain with a few things in mind. I needed to get some more wood cut, brought up, cut to usable size, stacked. I also needed to get some more grass seed down wherever it was patchy. I also wanted to focus on getting the place a little more livable. It happened, but not as much as I wanted. Anywhere I wanted to go in the shed, was nearly impossible to get to. It was really impeding my ability to work, so all plans were shelved and focusing on reorganizing was the new priority. Yea, it wasn’t my plan, but this was a long time coming. 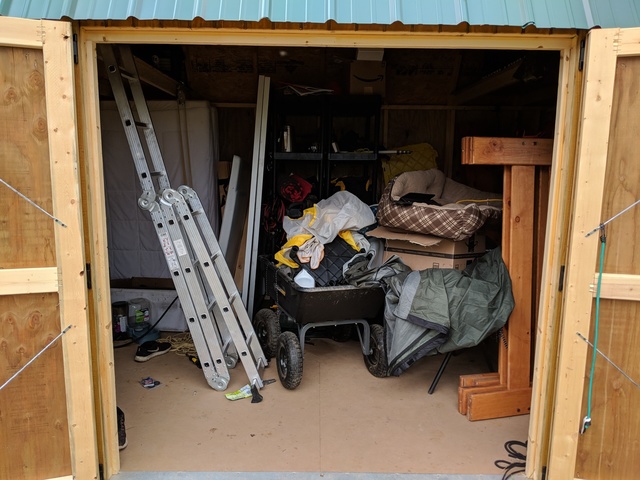 First thing was, literally pull anything out that was in my way. It was all pulled out. Everything, except for anything on the permanent storage. As I have brought things into the shed,  I have been slowly putting things down, but not organizing along the way. That could only change with a blank slate, and blank it I did create.

After I looked at it, and decided I liked the way I had it structured, but not the way you could access it. The shelves were turned around, the tools were reassembled, and a bunch of stuff I didn’t need in the next few months was put into the non-sleeping loft. I also pulled out a few things that just weren’t going to work out, were worn out, or broken. Those were taken to the car for later disposal.

But getting to the car had become a nightmare. The grass was significantly up! It was time to carve out a parking spot in the grass with the axechete. 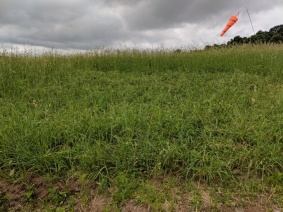 Now that I could begin to remove the rubbish, I got a good portion of it into the car… and then the rain started. I took lunch for a bit and worked on hydration (something I seem to forget every time I am up there). However, after lunch and hydration, the rain was still coming down, so I got a bunch more grass seed worked into the soil (yes, in the rain).

I am not going to say that all the moves were “good” but that they did achieve the goal of just getting stuff out of the way, so I can work in the shed. The rope winch (more on that later) has been super useful, but, finding a place for it when not in use has been a pain. 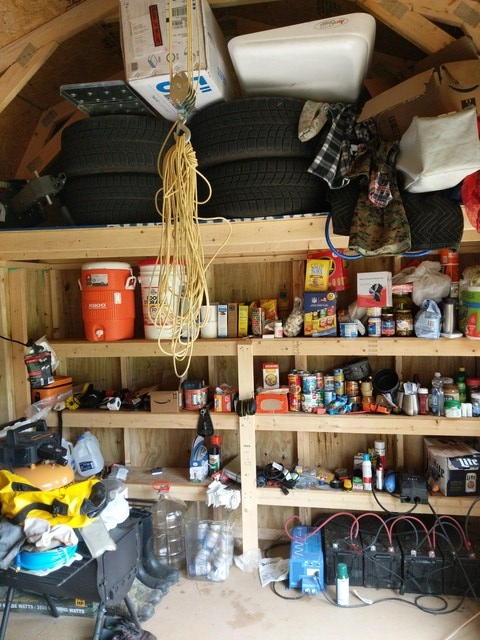 Yea, and that mess on the lower left of the picture. Don’t get me started. It was the “stuff drawer” that you would find in your kitchen. It’s been pulled out as well.

While pulling stuff out, I found the bug spray and went to town on a few areas. I don’t want to upset the wildlife ecology here in any significant way, but I did want to get rid of a few new massive ant mounds. However, working around massive anthills was determined to be impeding me while trying to haul wood. So, sprayed these two were. 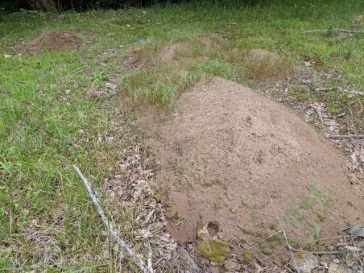 Finally, Mr. Spider and Mr. Wasp decided to take up residence in the area… so while I chased them off first, their homes were sprayed as well once they were gone. Unfortunately, Mr. Spider I carried for a good 30 meters on a log before I discovered I was transporting him. 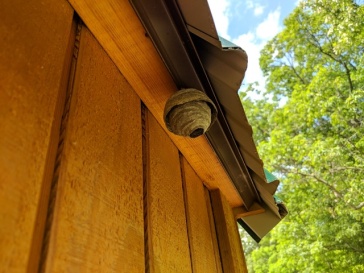 So after all this was done, I finally got back into the business of putting things away. I don’t have a whole lot of final pics, but I don’t think I am done yet either. I think I want to pull it out one more time, with a better long term plan of where stuff will go. 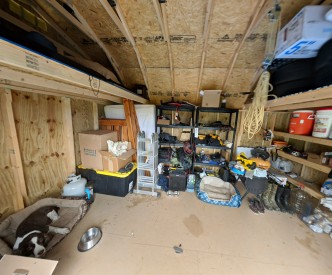 While the rain was coming down, I did manage to get the chainsaw chain sharpened up a bit, and also did a few cuts here and there. But with the wet soil and grass, I didn’t try and haul up any wood.

That progress been about 5 days ago or so, and ITS RAINED EVER SINCE… AGAIN. I am still unable to get out to the property in fear of damaging the roads. However, I will say that I went out there this time only 24 hours after major rain and the road was in really good condition, and not soft. I think it is finally getting stable and compacted enough where I can get out there any time, sun or rain. This makes me happy.