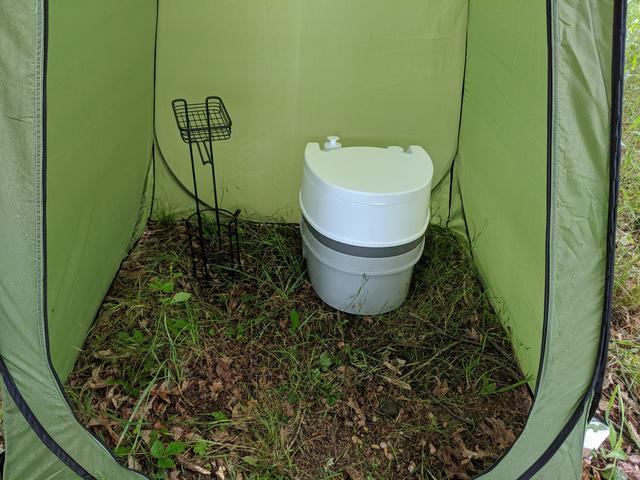 It’s time to talk about getting a toilet. No one wants to dig a hole in the forest and go poop in it, especially when there are bugs around. So its time to setup something where you can poop with confidence, and dignity. But eh, yea, you are still pooping in the forest.

So, where to begin. Let’s remove common solutions that aren’t work for now.

So here is the solution I decided on. A simple travel toilet. It seemed like the best solution I could find, and at a budget I could afford. Lets break this down. Before anyone freaks out, these pictures were taken prior to the toilet being used. 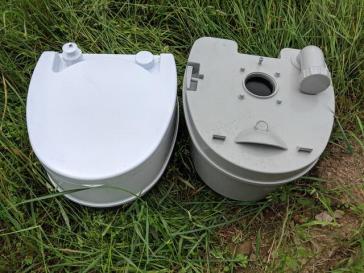 There are two portions of to the toilet. The white tank is the “clean” part. It is the top part, and holds the clean water (3.75 gallons). The beige (?) part is the holding tank (5.3 gallons), has the shutoff, and the clean out drain that swivels (top right). The stack on each other, which is nice so you don’t have to sit very low.

In these photos, you can see the water treatment drop-ins. These break down the waste and toilet tissue, help control odor, and have some oil in it to lubricate the toilet tanks parts. In the right two pictures, you can see a handle on the left open and closed. This controls the “door” to the holding tank. Keep it closed when moving the holding tank around, or when not around for a while. When its time to empty it, take it to the discharge area (more on that later), turn the pipe down, hit the vent button and drain.

Fill the holding tank with water so it can flush. 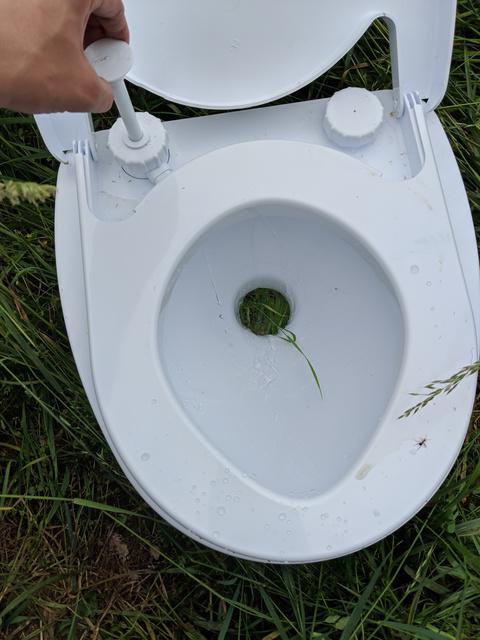 The knob on the top right flushes it, similar to a sailboat toilet. Pulling the handle up, or down pushes water down the toilet to flush. 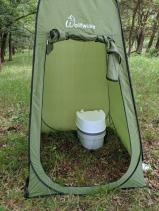 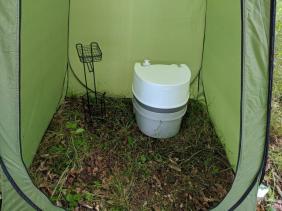 Then I got a small poop tent. Its technically a beach changing tent (privacy tent), but yea, it has stakes and can be attached to the Earth. This will work for what I am doing. I then assembled the toilet, and stuck it in there. Finally, I put a toilet paper caddy in there as well. However, to keep the smells down, this tent has a mesh ceiling so I will only be putting toilet paper in there on days with no chance of rain when I am out there. 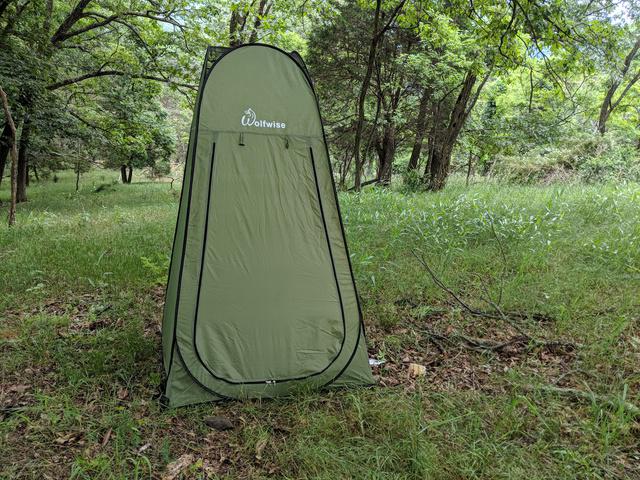 Discharge area: In the short term, I may be putting the toilet holding tank into the back of the truck and drive it over to the local park where they have full sewer systems. And its not too far away. I haven’t decided on this, but I may also create a few composting areas out on the property. One of these will be would be dedicated to processing humanure. Basically, you have a composting bin, and you add lots of stray / hay, and other organics to create a base. You add your waste, then add lots more stray / hay to cover (that keeps the bugs and critters away). The bacteria in composting will generate temps up to 160 degrees, which sterilize everything. However, I will only be returning this composting pile to earth, and not reusing it.

Long Term: Long term, I will probably do a two part solution. As I mentioned above, there is significant pushback against outhouses from the county, with one exception. With my conversations with the county health department rep, they recommended that I build the septic tank, and just the septic tank at first. That tank would be at least 1000 gallons in size, but only be a holding tank. Then I could build an outhouse on it. In a couple of years, it would be filled up, but then I could have a guy come out and drain it for about $200. If I were to build a house on the grounds, that same septic/holding tank could then be attached to a leach field. Then I would have a full septic system.