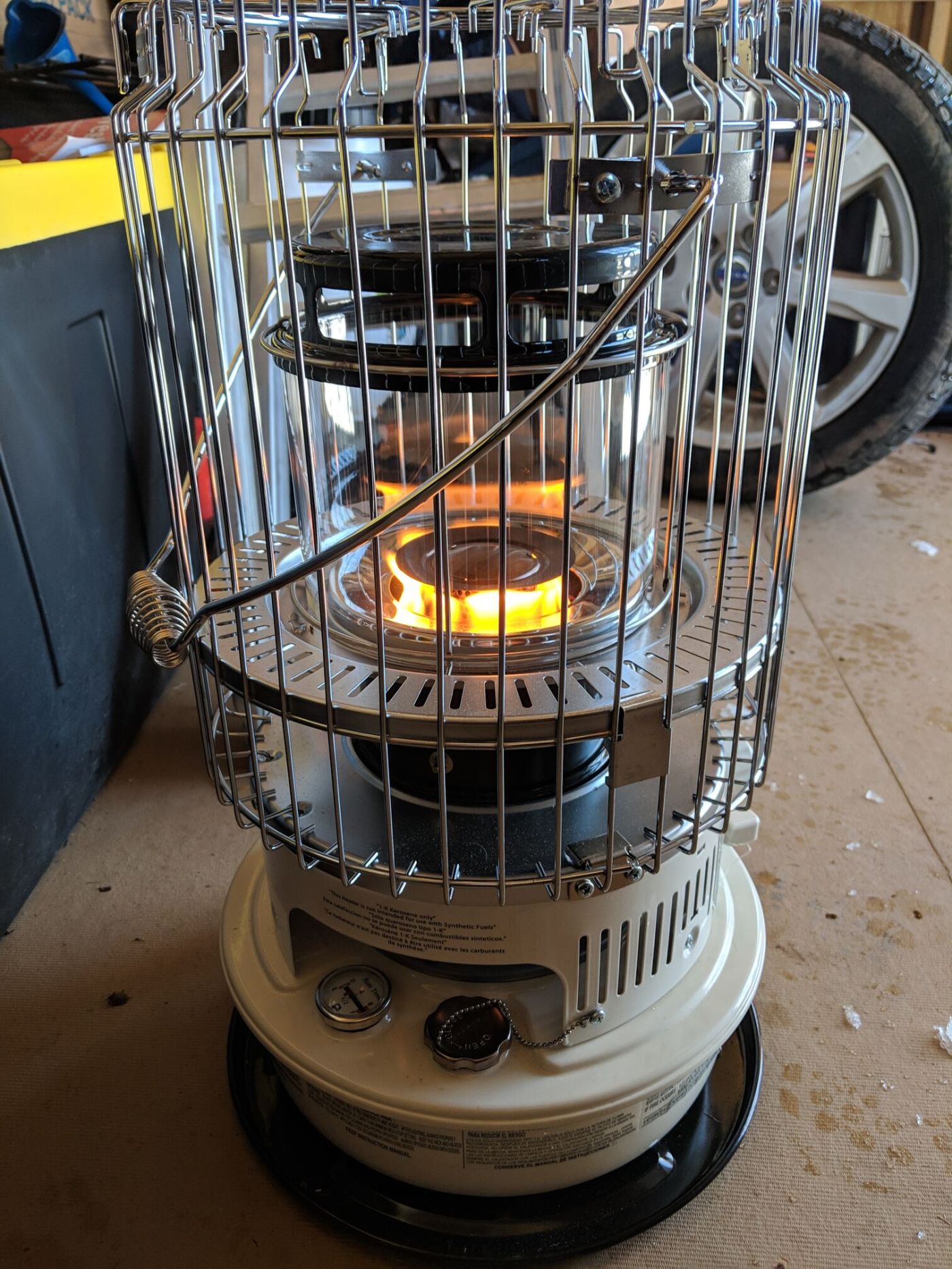 While I have done a few day trips out to West Virginia, I have also been staying the night in the makeshift cabin/shack despite winter approaching. With the weather dropping into temps where snow is possible, there were a few things that needed to happen to get ready for winter.

The first was cold prep. And by that, I had to go into the cabin and start removing anything that could freeze. Food, water, drink, chemicals all had to go. Yep, that means getting rid of the beer that I bought at the beginning of the season, but never really got around to. But so does that jar of pickles, some gallons of water, and some other stuff like roundup weed killer. Don’t want any of that freezing, breaking its container, and then leaking all over the cabin making a mess.

First thing is, lets accept the “cold hard truth.” The cabin IS NOT insulated. Let me repeat, NOT INSULATED. This is terrible.

Generally the idea is to create heat in a location, and prevent it from escaping. That could be your body, and clothes around it, and maybe even an extra layer of insulation with a winter jacket. For a house, or cabin, that would mean creating heat inside, and trapping it with insulation. That’s not happening here. Ideally I would like to run fiberglass insulation, but that’s kinda pricey right now, and then I would have to cover up the fiberglass with some sorta drywall or wood plank wall. I could do that, but I would need some more tools to do that at an affordable price. Also, its a project I don’t want to take on quite yet (I am eyeballing a few others first). I will put in insulation, just not right now.

So, whats the plan?

Right now, fossil fuels and solar energy. When I get to the cabin, I fire up two things to start generating heat. Kerosene, and propane. 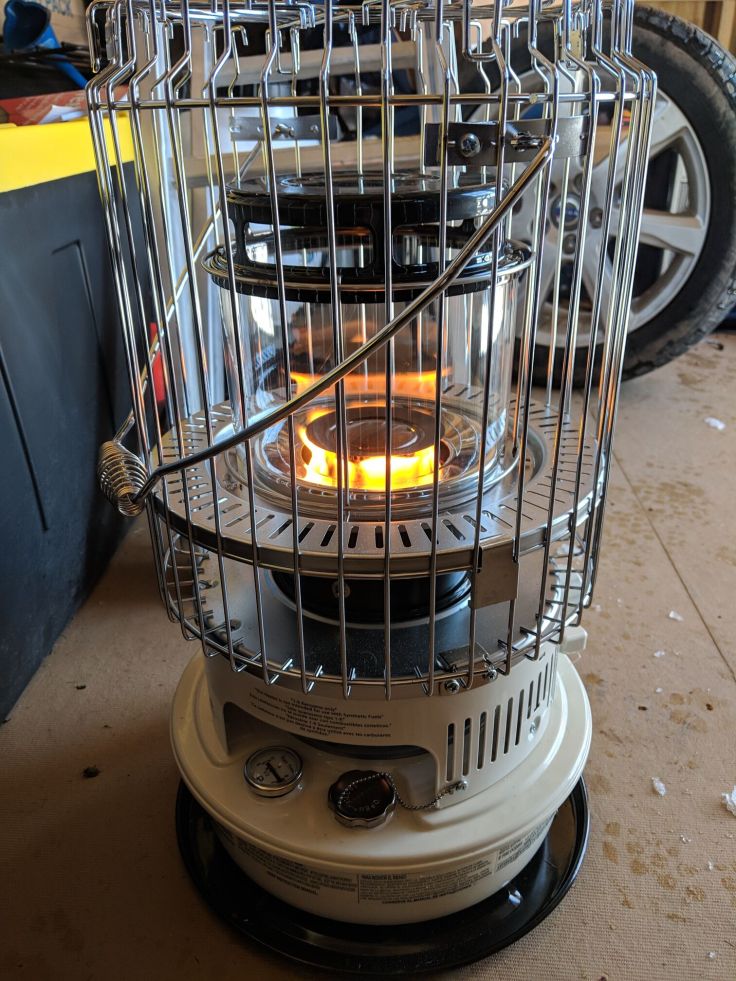 This heater can get the place pretty toasty, quickly. It can generate about 10,000 BTUs, which brings up the temp pretty quickly. However, its a little more expensive to run than the propane heater I think. So I primarily use this just to help bring the cabin (and all of the dense equipment in the cabin) up to temp.

The kerosene heater can be a bit tricky. First off, pop quiz, where is the closest place around you that sells kerosene? Exactly. Fortunately, this is becoming less of an issue for me as I have found a place about ten miles down the road that sells it. Of course I am not that smart and using 1 gallon kerosene jugs (but I have a five gallon jug on its way). 1 gallon can last me a few days but doing the trip is kind of annoying. The bigger jug will help reduce the number of trips. Kerosene is currently running about $3 a gallon from the pump.

Additionally, the first time I ran it, everything smelled like kerosene for a few days. Was not pleased. However, after doing some research, there are a few things that I learned. The first thing is, it pretty clean burning if you don’t turn down the “heat.” As long as you are keeping the amount of fuel up, it burns pretty clean and doesn’t produce an off smell or create too much soot. Its actually pretty good.

The second thing I am using is a propane heater, specifically the Camco 57341 Olympian Wave-6 6000 BTU LP Gas Catalytic Heater. I had been using a Mr. Buddy heater, but it turned out to be too much trouble for what it was worth (and finally stopped working). Both of them have the same principal of heating: take in propane, add a catalyst (I think this one is platinum) to increase the chemical reaction, and then emits heat at a very controlled pace. While it uses an open flame to start the reaction, it doesn’t there after which greatly reduces the amount of propane it consumes. However, the difference is the Mr. Buddy uses high pressure gas lines, and the Camco does not. It’s believed the Mr. Buddy heaters (including mine) likely fail due the high pressure gas line.

And… I just discovered I have no pictures of the Camco heater in action. So here is a youtube video.

So, couple of things here.. with both of these running, I am creating about 16,500 BTUs. That is plenty of heat right? No. In theory, I should be able to raise the temp of a 16x16x10 foot room, about 50 degrees. That’s not happening here because of 1) lack of insulation and 2) venting. If I can get 30 degrees above ambient (which is normally about 60 degrees in the cabin), that is pretty good. I can keep running the propane and kerosene as much as I want, but its pretty much a loss cause after I get to 60 degrees for an hour. At that point, I turn off the kerosene and just run the propane heater. Once I get some insulation going, this will change, but for now its good enough.

I leave the propane heater on while I am sleeping (there is enough vents to safely keep running it, and the strong winds normally force extra air in anyway). But while I am sleeping, I am using an electric mattress pad and sleeping bag. The pad only consumes about 100 watts, so I only use about 800 watt hours of solar power over night. That’s an easy amount of power to replace, considering that my available battery power is about 10 times that. Surprisingly, I have woke up a few time too warm because of the mattress pad and had to turn it down. Between the electric mattress pad, and the memory foam bed, I can sleep pretty well in the winter. And don’t worry, Tyr has his own electric bed to stay warm on as well.

Only once have I really been cold out there while I slept since getting the cabin. Unfortunately, that night the winds were 30-40 mph and the temps in the 20s. Cold air being blasted into the vents and into the cracks made for a terrible night, but I am working on some plans for that.

One thought on “Winter Prepping and Keeping Warm”